·
By Anne Hole
·
Under Props

5 ways to use a parachute during a Music Time 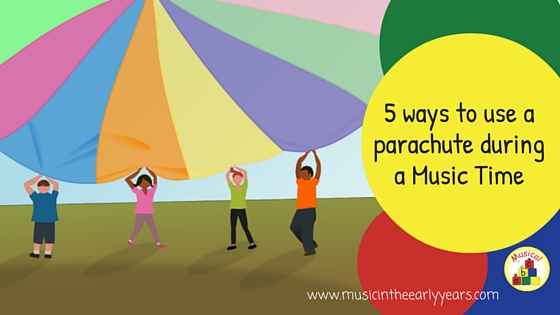 Do you currently use your parachute during your Music Time?  If not it's time to get it out of the cupboard; it's a great resource!  You may like to try some of these ideas:

Whether you are singing a song or listening to a piece of music a parachute is great for the children to develop their sense of pulse.  This can be done by moving it up and down, in and out or from side to side.  e.g. in Row, row, row the boat move the parachute in and out for the rowing and from side to side when rocking the boat.

There’s no end to this with counting songs/rhymes.  Bouncing, monkeys for Five little monkeys, ducks for five little ducks, any soft toys for 10 in the bed…

Listen to music and bounce balls, teddies, balloons...to the music.

3. Moving around in a circle

I have some parachutes that I have altered slightly.  I have attached ribbons that have velcro at the bottom so that I can hang pictures underneath; a cheaper option than buying puppets.  For example with the song '5 little ducks' you could hang 5 pictures of ducks from the ribbons so that the children can go underneath and remove them as each duck disappears in the song.  Then for the final verse ask them to reattach them when the ducks swim back to mother duck.

Go on, get that parachute out during your Music Time.

What lovely ideas! I've used songs in parachute sessions, but not used the parachute in music sessions- sometimes a change of perspective works wonders :)